The Exemplar vs. Actual Pre-approval

Previously, I had mentioned that not all pre-approvals are the same. So what exactly does a regional center mean when they say their project is “pre-approved”? Generally people understand this to mean that either 1) the project has an I-924 exemplar project approval or 2) earlier investors have already received approval of their I-526s. But sometimes, people might be referring to “actual” approved projects. Below I will compare 3 types of USCIS “pre-approval” letters and discuss the difference between an “exemplar” project and an “actual” project. But before I do, let me clarify some terminology. Form I-924 is the form used by regional centers to obtain an initial approval. The same form is also used by an already approved regional center to get a project pre-approved by the USCIS. When requesting preapproval the regional center will make the request by filing an “exemplar I-526” on Form I-924: in other words, a regional center will use a Form I-924 to file a “sample” I-526. So while people talk about “I-924 exemplar approvals”, technically you are being approved for an “exemplar I-526”. That is why there is no mention of “exemplar I-924s” in any of the letter samples below. 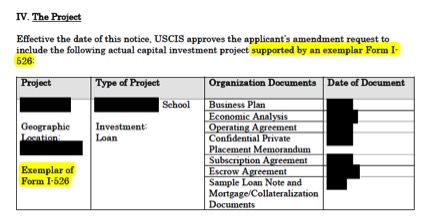 In a real exemplar approval, the phrase “Exemplar Form I-526 Petition Project” appears in the table. But more important is that in addition to the Business Plan and Economic Analysis, all the other offering related documents are specifically listed in the table.

In an “actual” project approval notice, you can see they do not mention the “Exemplar Form I-526” anywhere. And only the Business Plan and the Economic Analysis is listed on the table.

Now this third type of approval letter is a bit tricky. It actually says that the project is supported by an exemplar Form I-526. But “Exemplar Form I-526” does not appear in the table itself. And more importantly, again, only the Business Plan and Economic Analysis are approved. Personally, I think the mention of the exemplar Form I-526 above the table is just a typo. The USCIS very often uses existing letters as templates for both approvals and RFEs. So it is not uncommon to receive an RFE where a completely unrelated entity name is mentioned, for example.

So to confirm whether a particular project has received an “exemplar” approval (and not an “actual” approval), one has to make sure that in addition to the Business Plan and Economic Analysis documents, the offering documents are also listed in the letter.

However, I do not think it is wrong for a regional center that has received only an “actual” approval to say that its project is “pre-approved”. But one has to understand that the USCIS has never acknowledged that “actual” projects will receive “deference” in adjudications. In addition, even if the Business Plan and Economic Analysis do receive deference, because the offering documents have not been approved, the time advantage of an exemplar approved project probably do not exist in an “actual” pre-approved project.

Someone actually asked the USCIS on the December 5, 2014 EB-5 Stakeholder’s conference call whether “actual” projects would receive deference and the EB-5 team in Washington declined to answer the question saying that it was a “case-specific” question. The questioner argued that it was not case-specific but it didn’t help that much.

The reader should note that all of the examples above are from approval letters sent by the EB-5 team in Washington, DC. As some of you may already know, EB-5 petitions used to be reviewed at the California Service Center until the whole team was moved to Washington, DC. So exemplar approval letters that were issued from California have a different format. I won’t go into the California exemplar letters, however, because most are old and if someone is trying to market their project as an exemplar approved project on such an old approval, you have to question whether the project still is the same as the original application and thus wonder if the exemplar would still be honored by the team in Washington, DC today.