In the May 30, 2013 Memo, the USCIS gave regional centers the option to add on new geographic regions and NAICS codes without seeking a formal amendment. This allowed greater flexibility for regional centers to pursue different types of investment projects. However, recently there is indication that the USCIS has gone a step further with regards to NAICS codes and have completely taken them out of the regional center designation equation. 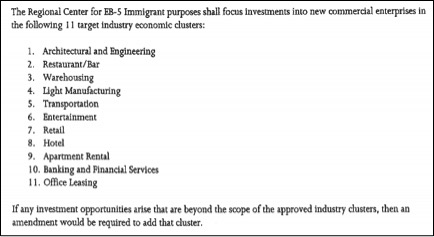 Then approval letters that came out of the California Service Center after the Form I-924 was introduced in 2010 looked like this:

Notice how the title says “Regional Center Designation” and then breaks out the “Geographic Area” and the “Industry Categories”.

Because the USCIS insisted on this very strict NAICS designation and at the time it took almost 18 months to get an amendment to a designation, it was very difficult for regional centers to take advantage of different investment opportunities. For example, a regional center that had successfully raised funds for a hotel could not take on a school project until the designation was amended to include the NAICS code for school. For a while the USCIS even tried to limit regional center investment activities by insisting on 6 digit NAICS codes thereby narrowing the scope of the approval.

The approval letters that were issued by the IPO (Immigrant Investor Program Office) after the EB-5 team relocated to Washington DC from California made the “approval” of the NAICS codes even more explicit by issuing letters that looked like this:

But they also added a footnote stating:

So while NAICS codes were still something that required approval, as stated in the May 30, 2013 memo, regional centers were finally free to pursue projects in other industries without having to waste time waiting for an amended designation.

But very recently, I came across an amendment approval that looked like this!

First, it “approved” the expanded Geographic Area that were requested:

And it also had the similar footnote as above saying, you can ask for more amendments next time if you need to expand your geography, but not necessary for you to do it.

But it did NOT include the new NAICS codes as part of the “approval” as it did in the past. Instead, the letter includes a new section that had not appeared in any of the approval letters before called “Job Creation”. And it is in this section that the NAICS code is listed:

In addition, the footnote to this table says something very new:

In other words, this footnote is saying NAICS codes are for informational purposes only and you don’t need to seek a formal amendment for “certainty” purposes like the USCIS has maintained since the May 30 memo was released in 2013.