On August 10, 2015 the USCIS issued a draft of its first major EB-5 policy memorandum since the May 30, 2013 Memo. As it has been over two years since then, the EB-5 industry has been eagerly waiting for new guidance which addressed the changing landscape of EB-5 and the USCIS has been promising one since the beginning of the year. This dire need for guidance has been driven by the fact that the Chinese EB-5 cut-off dates were established earlier this year (a/k/a Retrogression). Inevitably, Chinese Visa Retrogression will impact the current structure of how EB-5 jobs are counted, funds are deployed into projects and eventually returned to the investors.

Three topics were discussed in the Draft Memo:

In this article, I seek to address the second topic of Investment Sustainment requirements (a/k/a the Redeployment issue.)

The EB-5 Program, like many government programs, is a technical, rule driven program that requires careful navigation because there are a lot of rules, but also because these rules keep changing! Among these rules is one that says 1) the investor’s funds must be placed “at risk” and 2) that this “at risk” investment be “sustained throughout” the period of the investor’s conditional residency.

The fundamental issue is this: It used to take 3.5 to 4 years after an EB-5 investor started the EB-5 process by filing an I-526 Immigrant Investor Petition until the I-829 Removal of Condition Petition could be filed and the I-829 petitions would take under a year to get approved. And most loan-based EB-5 projects had 5-year investment terms. As a result, the immigration process was basically done before the 5 year mark so the requirement that the investment be “sustained throughout” the conditional residency period was never really an issue.

Here is a visual depiction of that timeline. The top portion pertains to the EB-5 process and the bottom portion illustrates the underlying investment made for purposes of obtaining the EB-5 visa. 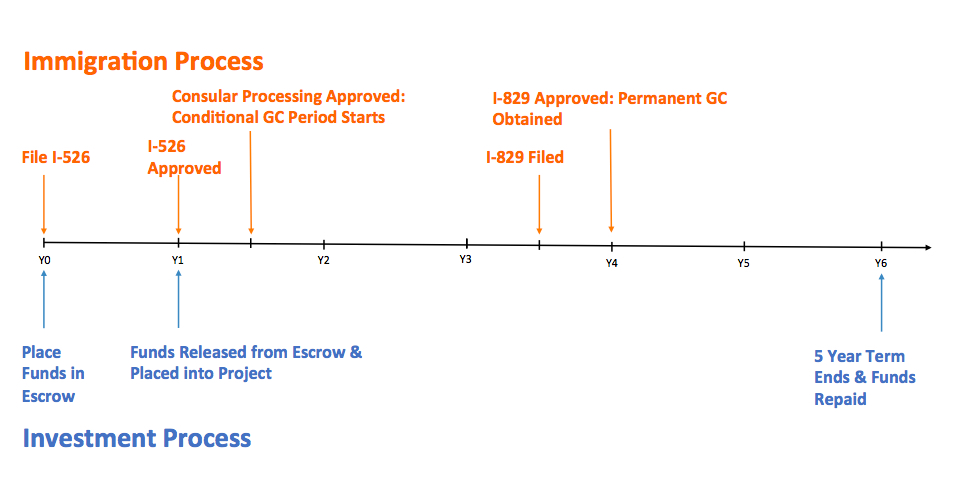 But Chinese Visa Retrogression and the increased backlog of I-526 petitions at the USCIS has changed the landscape.

As you can see from the second timeline, there are actually two forces at play here. First, Chinese Visa Retrogression has added a year or so between when the investor’s I-526 is approved and when Consular Processing starts. It has also made the Consular Processing timeline longer. (NVC letters are taking forever to arrive as any immigration attorney who does EB-5 petitions can tell you). Second is that most projects on the market today have early-release provisions in their escrow agreements so the investor funds are placed into projects a year earlier than the old system under which investor funds were not released until I-526 approvals.

In other words, EB-5 investments will be ready to be returned to the investors under the Investment Process timeline even when EB-5s investors have not yet obtained their permanent greencards under the Immigration Process timeline. So the Investment Sustainment guidance in the new memo is addressing what Regional Centers are supposed to do during the period in the second timeline indicated with a star.

EB-5 stakeholders all knew this was going to be a problem sooner or later and have been requesting guidance on what the NCE is supposed to do with the money when the JCE repays the 5 year loan to the NCE before investors’ I-829s are approved.

A brief detour for EB-5 beginners. The NCE (New Commercial Enterprise) is the company that is managed by the Regional Center into which EB-5 investors invest equity. The Regional Center then takes the funds invested into the NCE and loans it out to the developer’s project entity which is called the JCE (Job Creating Enterprise). Simply put, in a loan model EB-5 project, the NCE is the Lender/Regional Center and the JCE is the Borrower/Developer. The terminology comes from the statutes that govern the EB-5 program.

An interesting aside is that this issue had actually been discussed prior to Chinese Visa Retrogression in the context of condominium development EB-5 projects. This is because condominium development project cycles are traditionally shorter than, say, hotels or mixed used projects. In a typical hotel deal, requiring the developer to keep EB-5 funds in the JCE was not an issue because it usually takes a few years for the hotel to be stabilized before the developer can either refinance the project or sell it (at which time the EB-5 Loan would be paid off as part of either the refinancing or the sale).

However, in condo deals, the project timeline would often require developers to sell the property prior to the 5-year loan maturity date and many Regional Centers shied away from condo development EB-5 deals because of this very reason. But some condo deals did get off the ground and as the time for these condos to actually be sold came near, a handful of attorneys who were representing condo development EB-5 projects valiantly tried to get the USCIS to answer the question of whether the EB-5 investors’ funds would still considered to be “at risk” and sufficiently “sustained”, if the JCE/Borrower repaid the NCE/Lender and the NCE didn’t distribute the funds back to the EB-5 investors.

The USCIS, however, refused to be pinned down on the issue and would only say they would review the facts of the deal on a case-by-case basis. (Which is terribly unhelpful if you are a transactional EB-5 attorney trying to put a deal together.)

However, now that the Chinese Visa Retrogression has made the timing mismatch an industry-wide problem, the USCIS has been forced to establish guidance on the issue of whether investor funds need to be “redeployed” or can be held onto by the NCE in order for it to be considered “sustained throughout”.

And now, we have an answer: according to the draft of the new guidance memo, even if the JCE returns the funds to the NCE prior to the I-829, the NCE can’t just hold on to the funds in a “bank account or escrow account” and the funds must be redeployed into an “at-risk” activity. (The draft memo defines “at-risk” in the context of EB-5 as meaning that the capital must have a “risk of loss and a chance for gain” – which could be a topic of a standalone article so let’s leave it at that for now.)

One thing (though by no means the only thing) that is unclear is when does the sustainment period end. The USCIS did imply on the Quarterly Stakeholder’s call held four days after the draft memo was released, that the sustainment period ends once the I-829 is filed. But when someone tried to pin them down by asking, “So the investors can be repaid once the I-829 is filed and we don’t have to wait for approval?”, they waffled. (The I-829 approval process takes more than a year these days so this is not an insignificant difference.) And of course lawyers abhor uncertainty so unless the USCIS clarifies this point they will most likely advise clients to not pay back the investor until the I-829 is approved.

Balancing Act: Waiting for Guidance on the Guidance

In any case, this position of the USCIS is now forcing Regional Centers to engage in a delicate balancing act between ensuring that EB-5 investors funds are redeployed in the safest way possible while at the same time making sure it is not too safe that the USCIS rejects it by saying the funds were not “at risk” throughout the conditional residency period.

It will be interesting to see what clarification or changes, if any, the USCIS will make in the final policy memorandum after the September 8, 2015 comment period is over.